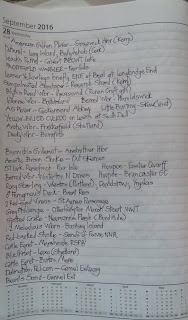 Record breaking numbers of YELLOW-BROWED WARBLERS in UK
Not only are these birds exceptionally early but today saw record numbers of this Siberian sprite arrive in Yorkshire, with no less than 170 recorded, including 86 at Flamborough Head, 34 at Filey, 15 at Spurn Point/Kilnsea and 14 at Buckton. Such an arrival this early is unprecedented and suggests an exceptional breeding season. Massive numbers are also arriving on Shetland, Fair Isle & Orkney (200+) and with numbers elsewhere in Scotland and in Northeast England & East Anglia, totals are approaching 400 individuals.
Elsewhere in Britain today, both the Landguard NR ARCTIC WARBLER and Mount Batten (South Devon) LESSER GREY SHRIKE remain, while new arrivals include a juvenile SABINE'S GULL all day at Upton Warren NR (Worcs) (perhaps the bird from Queen Mother Reservoir yesterday), an ARCTIC WARBLER on Shetland at Hoswick, RED-THROATED PIPIT on Lundy Island (North Devon) and a very confiding SPOTTED CRAKE at Slimbridge WWT (Gloucs).
Shetland is producing birds as one would expect this time in September, with Unst harbouring at least 3 LITTLE BUNTINGS, several Common Rosefinches and a Barred Warbler (without mentioning yesterday's BLYTH'S REED WARBLER at Uyeasound), with a PALLID HARRIER at Hillwell and a LITTLE BUNTING at Scatness, while in Aberdeenshire, the SEMIPALMATED SANDPIPER remains on the Ythan Estuary. Out west, an AMERICAN GOLDEN PLOVER is on North Uist at Berneray.
A RED-BREASTED FLYCATCHER is on Holy Island (Northumberland), while further south in East Yorkshire, the BLYTH'S REED WARBLER was retrapped at Kilnsea and released in the Church Field and the BLUETHROAT remained at Flamborough Head. Pretty quiet in East Anglia considering light SE winds, with juvenile ROSE-COLOURED STARLINGS still at Dungeness Observatory (Kent), Portland (Dorset) and Davidstow Airfield (Cornwall), this latter site also hosting both the AMERICAN GOLDEN PLOVER and BUFF-BREASTED SANDPIPER. The adult DALMATIAN PELICAN has returned once more to the Restronguet Creek (Cornwall) while other scarce waders include the LESSER YELLOWLEGS at Colchester Hythe (Essex) and Fremington Pill (North Devon), the adult winter WHITE-RUMPED SANDPIPER in the Pennington area (Hampshire), HUDSONIAN WHIMBREL still at Perranuthnoe (Cornwall) and PECTORAL SANDPIPERS at Marshside Marsh RSPB, Southport (Lancs), Siblyback Reservoir (Cornwall), Bardney Pits (Lincs) and Meare Heath (Somerset).  A drake FERRUGINOUS DUCK remains at the Welsh Harp Reservoir, Brent (Gtr London).


On the Isles of Scilly, a WOODCHAT SHRIKE remains on Tresco, with 2 COMMON ROSEFINCHES still by Fraggle Rock on Bryher.
Posted by Lee G R Evans at 21:22 1 comment: